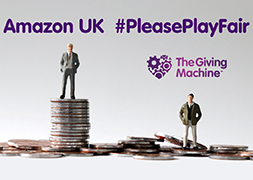 On Friday 9th August 2019, TheGivingMachine’s co-founder and CEO, Richard Morris, was interviewed by Peter White on You and Yours – BBC Radio 4’s consumer affairs programme. Richard highlighted how an unfair business practice by Amazon has reduced the donations generated by its users by over £400,000 affecting thousands of schools, charities and community groups all over the UK.

How can you help us get Amazon to change their unfair business practice?

Charity Penalised for Giving Away Money

TheGivingMachine charity enables consumers to generate sales commissions from online shopping and converts them into free donations for up to four different causes chosen by the consumer.

CEO Richard Morris and his co-founders started the charity to “put the heart back into commerce and to ensure that schools, small charities and community groups didn’t lose out on the ability to raise money.” He emphasised that “So far we have generated more than £1.7m in donations at no extra cost to supporters”.

Large retailers like Waitrose and Partners, John Lewis and Partners, M&S and BT all pay standard affiliate commission rates to TheGivingMachine and have a fantastic relationship with them. Amazon however, has drastically reduced the commission it pays TheGivingMachine and threatens the charity’s ability to raise money for all the small projects its giving community holds dear. TheGivingMachine is being penalised because it is a charity trying to help others. If it was a ‘for profit’ organisation, it would earn up to 11% for referrals depending on the goods bought. Instead, they are now given just 1%, (they started on 5% and gained volume bonuses, were reduced to 3% with no volume bonuses and now it is just 1%). Despite frequent requests to be treated the same as profit-making companies, the charity has not been able to find out the rationale for their reduction, nor has it managed to get the standard rates reinstated.

Richard Morris said “I’m baffled. I love working with Amazon and many of the consumers who use TheGivingMachine do their shopping on Amazon so they can help their community organisations. This is not a criticism of Amazon in any way. I just don’t understand why we can’t be paid the same rates as ‘for profit’ organisations. Why does it make any difference whether we give away our money afterwards or keep it for ourselves?”

One charity which has benefited enormously from raising funds in this way is The David Ashwell Foundation. David died two weeks after his birth, of a rare lung condition called ACD. His parents set up the charity in his name to raise money to research ACD. Nine years later, they have managed to fund research leading to potential understanding of the molecular and genetic causes of the disease and as a result of their work, there are beginning to be survivors including a five month old girl who has just had a transplant. This would not have been possible without asking their supporters to shop via TheGivingMachine.

Dr Amelia Ashwell is David’s mother: “My husband and I both have full time jobs and young children and our charity is very small. We don’t have that much capacity to fundraise so using TheGivingMachine is a vital way of ensuring a constant income for our charity. When Amazon, which is so used by all of us, reduces the percentage it will pay TheGivingMachine, but doesn’t do it for other, profit making players, it is actually really hurtful. It is a very important vehicle to raising money for any small cause which will never grab headlines but means a huge amount to those involved and affected”.

The Songwriting Charity was formed about eight years ago to help young people and children to express themselves and be empowered by issues affecting them like bullying and low self-esteem. They do this through writing, performing and filming musical performance in a group setting. Outcomes include increased confidence and happier young people. “Some of the people we’ve worked with have gone on to have stage and west end careers” John Quinn, co-founder, notes, and shares a letter from one young man who wrote to them recently: “Just noticed it’s been 10 years since you came to my school to do some recordings with us. I wanted to basically say thank you from an older version of me. The whole process was a big confidence booster for me back then and something I think about fondly. A lot has changed with me and I’m fortunate enough to sing and act every night for a living now. I’m currently in Kinky Boots and having the best time.”

Last year, having worked with a therapeutic counselling service and a small number of very vulnerable young women, one mother wrote the following:

“Thank you for all your hard work. It’s paid off more than you’ll ever know. I know my beautiful young lady is going to have an amazing life thanks to all the confidence she has gained because of working with you. – the positive relationship you have shared and being a great role model. Especially as she hasn’t had any man in her life that has been positive”.

The Songwriting Charity, like the David Ashwell Foundation and so many others, is small and relies heavily on donations and grants. ‘We’ve been with TheGivingMachine since the early days” says co-founder John Quinn. “It is easy to use and the premise is very simple – shop through this portal and trigger a donation from the retailer. You don’t have to do anything else. Once it’s ingrained in your online shopping behaviour, it’s brilliant. You get regular income with minimal effort and admin fees are low compared to others out there which we’ve used in the past”.

TheGivingMachine CEO Richard Morris has a plea for Amazon and all other companies offering affiliate commission: “Please treat us the same as everyone else. We really value working with you and would love to be able to pass on as much money as possible to the amazing schools, charities and community groups we work with. The stories above are just a small glimpse into the difference we can make for causes which will never have a national profile but have a massive impact locally. Our plea is for parity with all those organisations being paid more than us because they are profit making”.

Listen to Richard on You and Yours by clicking the button below. TheGivingMachine starts at approximately 15 minutes 50 seconds.

Listen to You and Yours

Thank you to all our #TGMHeroes