Bishop's Stortford dad's new book on the art of giving

Posted on January 29th, 2013 by Strawberrysoup 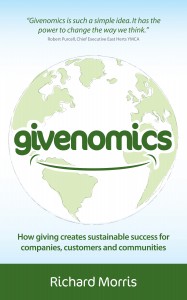 ONE of four Bishop’s Stortford dads behind a website which raised £185,000 for good causes in 2012 and £500,000 in total has published a book to pass on his charitable ideas.

The business leader and a digital-orientated entrepreneur draws on the experience of building and managing the not for profit social enterprise for his book called Givenomics.

Richard said: “In looking at the social impact, it was clear that there was something deeper at work in the way companies, customers and communities were being connected to make a positive difference for all.

“The result is Givenomics – a concept for those who want to see businesses as a force for good with new ways to engage their customer base, customer empowerment to support their communities and new ways for community organisations to gain and maintain vital support in a tough climate.”

He added: “The message is that businesses, those that mainly focus on retailers, have chased profitability alone for a long time.

“There is an increasing awareness that the economic world needs to connect to the communities we live and work in locally, nationally, globally – it’s one world. Givenomics is a model that enables commerce to be a force for good, driven/powered by customers.”